I work in the web design industry and I’m amazed every single day by the lack on knowledge, respect and understanding of the basic design principles that I take for granted. I trained for 4 years in Graphic Design by some of the best, or more accurately traditional, designers in the business where I had these principles drilled into me. Taking these basic design principles and any talent for design and creation, I have forged another 7 successful years in the industry.

My aim with this post is to lightly guide those of lesser experience in the right direction with a series of examples and explanations, gliding over some pretty basic teachings so that we can approach our next job with a real educated grounding in the why’s, how’s and when’s of design.

The basic theory of proximity is concerned with the arrangement or categorisation of elements that relate to one another. To understand why, when elements of a similar nature are grouped together the information becomes a visual unit. This provides a viewer with a visual clue as to the concept you are communicating rather than being confronted with a scattering of unrelated graphical elements. When a number of graphic elements are close in proximity a relationship is implied. If elements are logically positioned they connect to form a structure to your design, this is also known as Visual Hierarchy.

Visual Hierarchy arranges elements to create focal points by positioning their priority within a concept as a whole. To do this you will need to ask yourself what the key elements of your design are, which graphics communicate your concept most strongly? Which graphics support your concept and how could you illustrate them to create a visual structure from most to least important? You may consider displaying your graphics using different sizes and colours to give them visual weight. 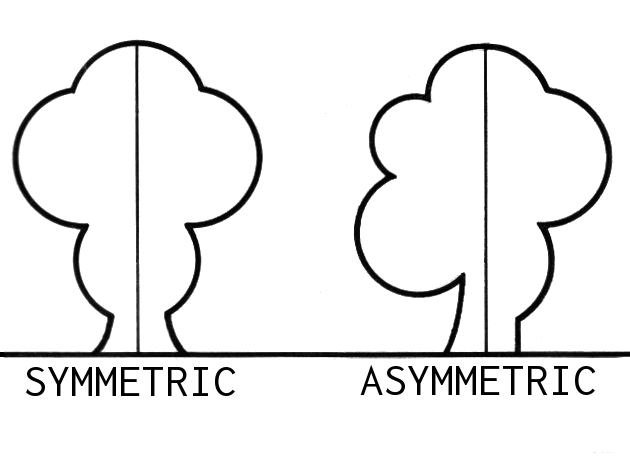 The principle of alignment focuses on the placement of graphical elements and their relationship to each other and as a whole. Following the principle of proximity, alignment allows a visual connection with elements in your design to be formed even if they are not close in proximity. Alignment helps to create unity and balance.

Balance is the concept of visual equilibrium. It is the combination of opposing elements in a composition that results in visual stability. Most successful compositions achieve balance using symmetry or asymmetry.

Symmetry refers to the organisation of elements in which a balanced visual hierarchy is achieved through the alignment of graphics along a horizontal or vertical axis. This means that your design can be reflected precisely over a central axis like a mirrored image.

In contrast, design elements that display an unbalanced visual weighting that are made up of elements differing in size, colour and shape are organized and positioned against one another to create asymmetry.

Repetitive elements throughout a design piece can be used to enhance and clarify information. Repetition adds visual interest to your design, and helps to identify elements that belong together. It can be considered a way of adding consistency to your design.

The consistent repetition of graphic elements works to create visual unity. These elements can be as simple as colour, spatial relationships, a shape, a texture or a typeface. Sometimes repetitive elements are not identical in appearance but are in fact so similar that their connection is clear.

Unity is the underlying principle that sums up all of the principles and elements of design. Unity refers to the combination of all elements successfully working together to achieve a sense of harmony in your design. This can be achieved through the consistent use of graphic elements. Using repetition or patterns is one of the most basic factors in creating a strong sense of unity.

An effective use of contrast enables you to add interest to your design by highlighting specific graphic elements. This will result in a more visually striking composition. To achieve this ‘contrast’ is employed as a means of creating a visual hierarchy among different graphic elements. It can be applied to graphic elements, as light, dark, warm, cool, large, small; etc.

Contrast is most effective when it is strong; the focal point of a design is usually a result of contrast where the eyes will naturally be drawn. Here contrast can be used to direct the focus of a composition. When used as a device to emphasize or highlight design elements it is important to remember that an ineffective use of contrast may result in confusion.

Dynamics is the arrangement of visual elements in a composition to suggest the illusion of movement or direction. The effective use of dynamics in a design can add an emotive characteristic to your design making it appear restful and calming or active and energetic.

Rhythmic: A steady rhythm that creates predictability and order in a composition.

Arrhythmic: Follows an unstructured rhythm to add visual interest to a composition.

Random: Without a structured approach or a defined order that creates spontaneity in a composition.

Directional: The use of graphic elements used in such as way that implies a visual connection to lead the eyes to move in a particular direction.

Creating a dynamic composition involves the use of patterns or the repetition of graphic elements and movement to be effective in its execution. The suggestion of motion by the use of repeated structures creates dynamics.

Emphasis refers to the focal point or centre of interest of a composition. This is an area that is visually dominant and eye-catching that a designer has emphasized through the clever placement of graphic elements.

Used effectively in combination with the principle of visual hierarchy ’emphasis’ can assist to establish a primary focus and an alternative secondary emphases in another area of the composition.

Emphasis can be achieved by use of repetition to highlight and draw attention to a repetitive element. When used with ‘repetition’ the emphasis is usually a break in the basic structure or visual rhythm of a pattern that causes your eye to pause or focus on a particular element.

Contrast achieves emphasis by accentuating an area to visually separate one element from another. Contrast in color, texture, scale, or shape attracts attention to a definite area, which may consist of strategically positioned graphics to call attention to a single element of your design.

Gary Hartley is The Floating Frog. A seasoned freelance web designer with skills in UI/UX, CRO design, WordPress, branding, PSD-HTML conversions and more. Got a project you need to start or take to the next level? Please, get in touch!

Pretty interesting points, frog. I have never actually seen these terms used together before – for example, to group rhythm and direction under Dynamics makes sense. Also I like your image for Proximity – again, it makes sense. You were fortunate that you had the principles drilled into you.

I’m trying to illustrate these concepts as well on the Theory pages of my website – I believe most of us who are interested in design theory are visual learners, so it makes sense to have images whenver possible.

I’ve been teaching digital design in art colleges and I really try to stress to my students that the theory / principles are critical. They / we all / need to train our eyes and minds to see where the principles exist in nature and in the man-made world around us, so that our understanding is internalized.

Unfortunately, only a small portion of today’s students are really ready to get serious about doing what it takes to become good designers.

Start a project with me